Ambassadors and participating governments and organisations at the event explored providing funding for the initiative and its further expansion. In the run-up to the event, the Embassy of Switzerland donated $60,000 towards the PCYO's touring costs over the next three years.

Christian Schoenenberger, Head of Mission, Embassy of Switzerland in Georgia, said: "I first came to know the Pan-Caucasian Youth Orchestra when I attended the Tsinandali Festival of classic music in September. Working in Georgia, we feel how important it is to improve relations between different countries in the region. We see the orchestra as a fantastic sign of hope and understanding."

Alongside hosting embassies, the event in Tsinandali was attended by ambassadors and representatives from the PCYO member countries, senior representatives of the Georgian government and parliament, and a number of private sector supporters.

George Ramishvili, chairman of Silk Road Group and co-founder of Tsinandali Festival, said: "The Pan-Caucasian Youth Orchestra embodies the spirit of cultural exchange and peaceful recognition between peoples that we want to advance here in Tsinandali. The support of international partners is invaluable in making this possible and shows just how important this initiative is for building friendship between nations." 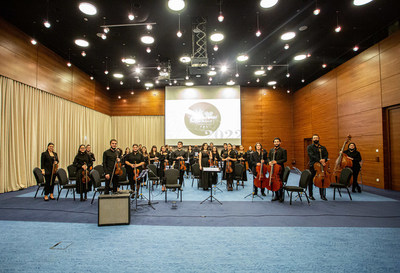 The PCYO was established in 2019 as a key element of the inaugural Tsinandali Festival, an annual classical music event held at the historic Tsinandali Estate in Georgia. Both the Festival and the PCYO are led by world-renowned musical director Gianandrea Noseda, who has also conducted the BBC Philharmonic, the Zurich Opera House, and the Berlin Philharmonic, among others.

As a result of the coronavirus pandemic, the PCYO has been unable to perform since 2019. The orchestra is set to return for the 2022 edition of Tsinandali Festival, with auditions planned for next year across participating countries.

Tsinandali Festival's general director David Sakvarelidze said: "It has been incredibly gratifying to see the support and recognition given to the PCYO by international partners today. The PCYO performed the first ever concert at Tsinandali Festival in 2019 and, over the coming years, we wish for the orchestra to continue its mission as platform for breaking down barriers and building mutual understanding."